About our Wildlife Garden

At Dane Ghyll School we have a Cumbria in Bloom award winning environmental area where the children are encouraged to explore the great outdoors.
We have a large wildlife pond full of frogs, a willow archway, bug hotels, wormery, musical stumpery ,mud kitchen and lots of bird feeders.
We like to encourage wildlife into the garden,we also have hedgehogs hibernating in the winter months
The wormery was built using old tyres and is a composting system where the worms reduce vegetable scraps to high quality compost and liquid fertilizer to be used on the school vegetable beds.
The children have also added an old washing machine onto the bug mansion to keep our bug visitors warm and cosy.
Bird feeders are made on a regular basis to keep the birds well fed.
More recently we have installed a solar panel and fountain in the pond .This will hopefully reduce algae forming on the surface of the water .We received a kind donation from Sir John Fisher Foundation to purchase these items.
With the help of Mrs Postlethwaite the children continue to nurture this wonderful area.


March Wildlife Update
Wow ,there are so many frogs in our pond at the moment!
The children have all enjoyed frog spotting .  Because of our solar powered fountain the water is clearer and you can also see huge amounts of frog spawn under the water.
The daffodils and crocus in the wildlife area look lovely. 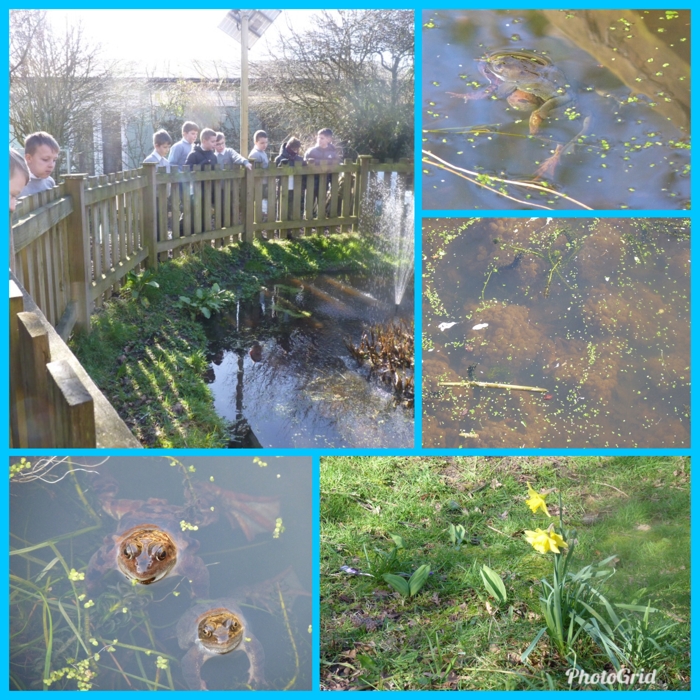 February Wildlife Update
Year 5 children took part in the RSPB Big Bird Watch counting birds they saw in the gardens.
This was the 40th Anniversary of the Big Bird Watch ,the RSPB first started collecting data in this way in association with Blue Peter.
Year 6 made bird feeders ,threading cheerios onto string and also covering pinecones with lard and bird seed.
We have had sightings of our first frogs!! January Wildlife Update
We have continued clearing the wildlife area and have managed to make a new secret walkway between the trees .
We now have a rockery made from stones found in the undergrowth.
The pond was frozen this month ,it really is winter now! 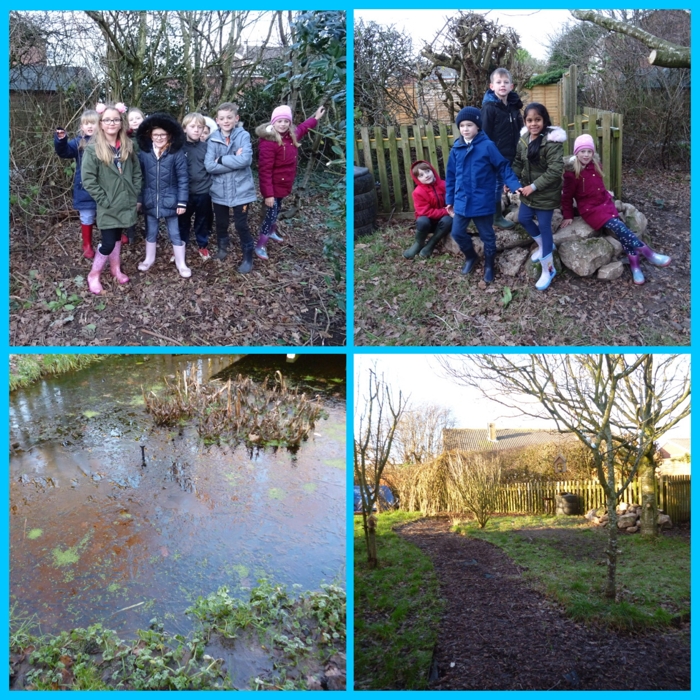 December Wildlife Update
We have had a tree trimming and general tidy up in the wildlife area this month. There were some fruit bushes hidden away which we have dug out to replant in our fruit orchard.
The extra large pumpkin seems to be providing food for our visitors.
The wormery was emptied of worm juice and moved to a different location in the wildlife area.
Unfortunately our bird table was very damaged so was removed .We will need to purchase a new one soon .
The children have written to local businesses asking for any kind donations for the garden so hopefully we will have the funds soon. November Wildlife Update
Now the solar panel is connected the fountain is looking wonderful.
Paul has cut and re weaved the willow arch.
We have cleared some undergrowth and low hanging branches . These were taken away to be used on a community bonfire. October Wildlife update
Year 4 have had a big clear up on the wildlife area , collecting branches and leaves and adding them to the bug mansion.
They also fed vegetable peelings to the worms and made bird feeders to hang on the trees. September Wildlife update
Prior to the summer holidays we received a kind donation from the Sir John Fisher Foundation which allowed us to purchase a large solar panel and Fountain.
Paul and the children fitted the fountain in the school pond .
Hopefully this will keep the pond clear of algae. 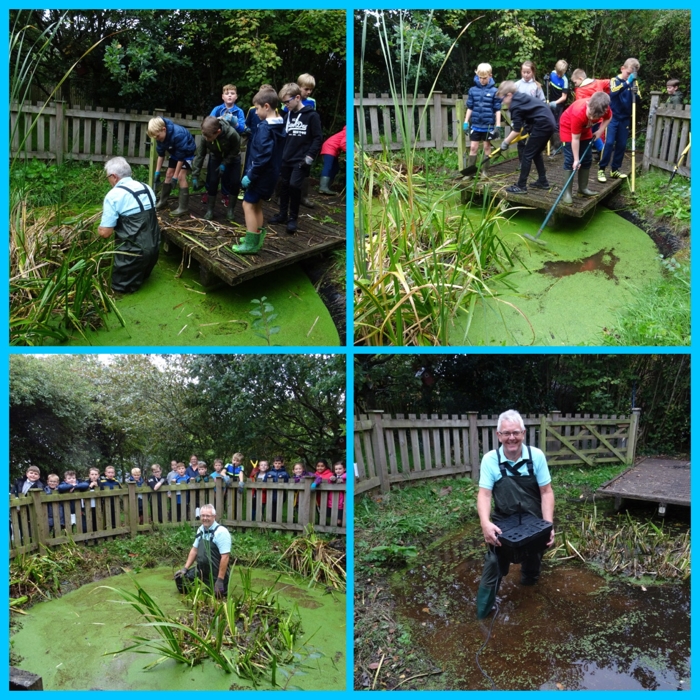 We believe that each child will succeed through experiencing quality in: 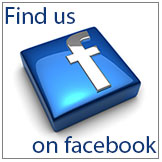